Blake de-Vos, Aiden Richards and Christopher Clayton arrived at the stadium and were shown into a conference room where they chatted excitedly with Simon Carnall who, as Head of Community for Derby County Community Trust, is a familiar face to most Derby Pride Academy students.

Both Sam Rush and Simon Carnall are heavily involved with and huge supporters of Derby Pride Academy and believe in the messages it has become renowned for, of giving students another chance to succeed through a bespoke provision of specialist learning and sports.

This particular visit was set up as part of a rewards system for all DPA students and involved a tour of the stadium and the opportunity to ask Sam questions about himself and the club.  Within a few minutes of the students arriving, Sam appeared with a big smile and enthusiastically introduced himself to everyone.  Once sat down, Sam asked the students a few questions about themselves before inviting them to begin their questions.

“Mine aren’t just football related, so I don’t mind starting,” offered Blake, who then proceeded to ask Sam about the rugby teams that he has played for.

“I played for the Saracens for many years,” said Sam.  “I was 13 when I started and from the age of 18 to around the age of 27 I played in their first team.”

Blake asked what position he played in, to which Sam responded: “Fullback, Centre and Wing – but I really enjoyed Fullback.”

Blake’s next question was, what advice Sam would give him for going forwards in a career in rugby or cricket coaching, which is what he would like to do.

“I’d recommend a mixture of education and sport,” replied Sam, “keep the education going and aim for further education so that you can get into coaching and at the same time learn about the science and management of sport.”

Sam then continued to recommend universities that he rated highly in terms of their courses that would be particularly useful for Blake: “Go for a university with a good course but one that also has a very good sports team,” he said. “Keep going and the opportunities will emerge.”

He then backed this up by listing names of some of the members of his rugby team when he was a student at Loughborough University, who have high profile sporting jobs such as Coach of England Sevens Rugby Club and Coach of Nottingham Rugby Club.

Next to question Sam was Aiden, who wanted to know what Sam’s ambition was when he was younger.

“I had lots at different stages,” said Sam.  “Early on I wanted to be a professional footballer but I didn’t play a lot of football so that was a bit of a drawback!

“I did play a lot of other sports – cricket in the summer and rugby all year round.  Rugby wasn’t professional like it is now though, so I realised I needed to make the most of my education to make sure I had options.  I decided to study law at University, which I found really interesting.”

Finally, Chris began his questions for Sam by asking which team Sam had dreamt of playing for as a professional footballer, to which Sam responded: “I used to live really close to Arsenal so in the 1970s that was my dream club.”

Moving on to a different topic Chris then asked Sam if he was well behaved at school.  Again, Sam laughed and smiled: “If I’m honest, not always,” he said, “but it was in a constructive, challenging way.  Teachers would say I was a bit of a handful and I asked a lot of questions.

“I had a lot of energy and found that the more sport I played, the better I was in the classroom, so I’d knuckle down and work hard from about 8 ‘til 3 because I knew that from 3:30- to 7:30 I’d have my sports time.

“It helped that my teachers recognised that I liked sport and was good at it – if I worked hard in lessons I found that they would encourage me and take an interest in my sport; sometimes even driving me to matches and coming to watch me play.”

When the boys had finished their questions Sam continued chatting with each of them, asking what they wanted to do when they were older and taking a genuine interest in asking what sports they enjoyed – from those they played themselves to the football teams they supported.  Completely relaxed and at ease, all of the students were happy to share their ambitions with Sam, who they obviously respect and admire.

With role models like Sam Rush supporting Derby Pride Academy, alongside specialist teaching that encompasses the importance of an excellent education with a strong focus on sport and planning for the future, the partnership between Derby County Community Trust and Derby Pride Academy continues to strengthen and evolve; providing more and more opportunities for students to be proud to succeed. 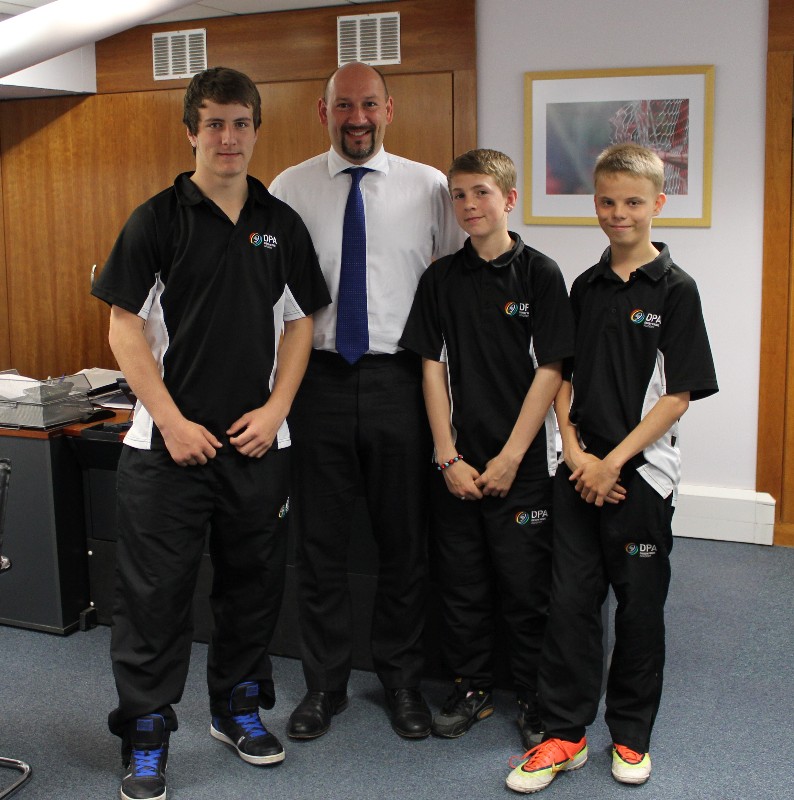